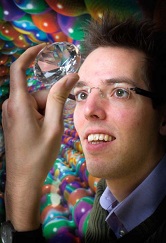 Looking at the inside of an object with mathematics

In this lecture I will show how mathematics enables us to look at the inside of an object without opening it. Using tomography, we can compute what the inside of an object looks like, from a series of X-ray photos, taken from a range of angles. For example, the “object” can be a medical patient who undergoes a CT-scan in a hospital or a computer chip that must be checked for internal defects. Tomographical research started over a century ago, with a publication of Johann Radon in 1917. Since then tomography has developed into a mature field of mathematics that brings together ideas from analysis, (integral) geometry, linear algebra, and optimization. The strength of the underlying mathematics is reflected by the fact that the same computational methods can be applied in (electron) microscopy to study nanomaterials, and even in astrophysics to reconstruct the interior of stars.

After introducing tomography, its applications, and the underlying mathematical model, I will talk about questions such as: “how many viewing directions do we need to create a reliable image?” and “what can we do to reduce the number of required views even further?”. Finally I will show that we can even scan people in 3D without them being aware of it: tomography using Wifi signals.


Joost Batenburg obtained M.Sc. degrees in Mathematics (2002) and Computer Science (2003) from the University of Leiden. He obtained his PhD in 2006 on the topic of discrete tomography under the supervision of Prof. Robert Tijdeman. After a period at the University of Antwerp (2006-2010) he moved to Centrum Wiskunde & Informatica in Amsterdam to work as a staff researcher. Since 2016 he is group leader Computational Imaging at CWI, leading a team of 16 researchers. He is also part-time full professor at the Mathematical Institute of Leiden University. His research interests involve all aspects of 3D imaging, including modelling of the physical imaging process, mathematical inverse problems, and large-scale computing. He received Vidi (2011) and Vici (2016) grants from NWO.